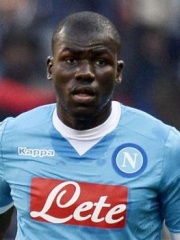 Kalidou Koulibaly (born 20 June 1991) is a professional footballer who plays as centre back for Serie A club Napoli and captains the Senegal national team. Often regarded as one of the best defenders in the world, Koulibaly earned a place in The Guardian's 100 Best Male Footballers in 2019, where he was listed as the third-best centre back in the world.Koulibaly began his professional club career with French team Metz in 2010, before moving to Belgian club Genk in 2012, winning the Belgian Cup in his first season. Read more on Wikipedia

Since 2007, the English Wikipedia page of Kalidou Koulibaly has received more than 1,826,062 page views. His biography is available in 35 different languages on Wikipedia making him the 1,863rd most popular soccer player.