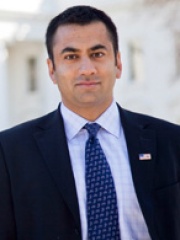 Kalpen Suresh Modi (born April 23, 1977), known professionally as Kal Penn, is an American actor, author, academic lecturer, and former White House staff member in the Barack Obama administration. As an actor, he is known for his role portraying Lawrence Kutner on the television program House, as well as White House staffer Seth Wright on Designated Survivor and Kumar Patel in the Harold & Kumar film series. He is also recognized for his performance in the film The Namesake. Read more on Wikipedia

Among actors, Kal Penn ranks 6,664 out of 9,996. Before him are Lee Jin-wook, Princess Theodora of Greece and Denmark, Jerry Yan, Zach Roerig, Anna Belknap, and Clarence Gilyard. After him are Shriram Lagoo, Yū Aoi, Logan Marshall-Green, Lorena Rojas, Jamie Chung, and Aubrey Plaza.