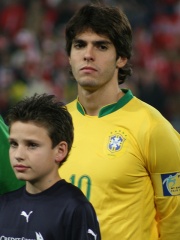 Ricardo Izecson dos Santos Leite (Brazilian Portuguese: [hiˈkaɾdu iˈzɛksõ duˈsɐ̃tus ˈlejt͡ʃi]; born 22 April 1982), commonly known as Kaká (Portuguese: [kaˈka] (listen)) or Ricardo Kaká, is a Brazilian former professional footballer who played as an attacking midfielder. In his prime as a playmaker at AC Milan, a period marked by his creative passing, goal scoring and dribbles from midfield, Kaká is widely considered one of the best players of his generation. With success at club and international level, he is one of eight players to have won the FIFA World Cup, the UEFA Champions League and the Ballon d'Or.Kaká made his professional club debut at age 18 at São Paulo in Brazil in 2001, and his performances with the club led to him joining Serie A club AC Milan in 2003. Read more on Wikipedia

Kaká is most famous for being a Brazilian soccer player.

Page views of Kaká by language