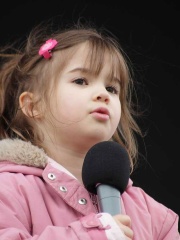 Kaitlyn Ashley Maher (born January 10, 2004) is an American teen singer and actress known for being the Youngest Top 10 Finalist on America's Got Talent and for her roles in films such as The Search for Santa Paws, Santa Paws 2, Free Birds, and the PupStar series; as well as television shows such as FOX's The Goodwin Games and PBS' Mack and Moxy. She serves as the first-ever youth ambassador for the global nonprofit Compassion International and is a national debate champion, singer/songwriter, and global advocate. In 2008, at the age of 4, Maher appeared on the third season of America's Got Talent and for her audition sang "Somewhere Out There". Read more on Wikipedia

Among people born in 2004, Kaitlyn Maher ranks 11. Before her are Amira Willighagen, Alexandra Trusova, Mana Ashida, Cori Gauff, Mackenzie Ziegler, and Francesca Capaldi. After her is Charli D'Amelio.