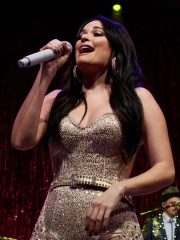 Kacey Lee Musgraves (born August 21, 1988) is an American singer and songwriter. She has won six Grammy Awards (including the Grammy Award for Album of the Year in 2019), six Country Music Association Awards, and three Academy of Country Music Awards. Musgraves self-released three solo albums and one more as Texas Two Bits, before appearing on the fifth season of the USA Network's singing competition Nashville Star in 2007, where she placed seventh.She later signed to Mercury Nashville in 2012 and released her critically acclaimed debut album Same Trailer Different Park in 2013. Read more on Wikipedia