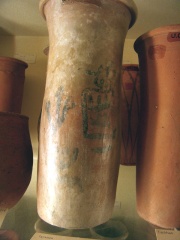 Ka, also (alternatively) Sekhen, was a Predynastic pharaoh of Upper Egypt belonging to Dynasty 0. He probably reigned during the first half of the 32nd century BC. Read more on Wikipedia

Page views of Kas by language

Among politicians, Ka ranks 5,059 out of 15,577. Before him are Carl Bildt, Aristobulus I, Julius Schaub, Wu Qi, Wei Zhongxian, and Antipope Constantine II. After him are Grand Duke Peter Nikolaevich of Russia, Tokugawa Iemochi, Kong Rong, Hastein, Al-Muhtadi, and Duke Xiao of Qin.