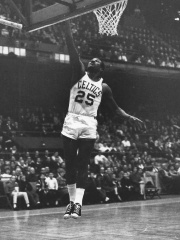 K. C. Jones (born May 25, 1932) is an American retired professional basketball player and coach. He is best known for his association with the Boston Celtics of the National Basketball Association (NBA), with whom he won 11 of his 12 NBA championships (eight as a player, one as an assistant coach, and two as a head coach). As a player, he is tied for third for most NBA championships in a career, and is one of three NBA players with an 8-0 record in NBA Finals series. Read more on Wikipedia

Since 2007, the English Wikipedia page of K. C. Jones has received more than 512,333 page views. His biography is available in 17 different languages on Wikipedia making him the 111th most popular basketball player.