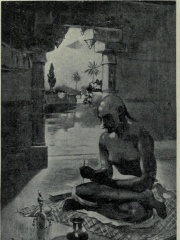 Kālidāsa was a Classical Sanskrit writer, widely regarded as the greatest poet and dramatist in the Sanskrit language of India. His plays and poetry are primarily based on the Vedas, the Ramayana, the Mahabharata and the Puranas. Read more on Wikipedia

Since 2007, the English Wikipedia page of Kālidāsa has received more than 1,828,698 page views. His biography is available in 123 different languages on Wikipedia making him the 110th most popular writer.

Page views of Kālidāsas by language

Among people born in 400, Kālidāsa ranks 1. After him are Saint Ursula, Merovech, Pope Celestine I, Pope Zosimus, Olybrius, Alexius of Rome, Joannes, Publius Flavius Vegetius Renatus, Fritigern, Constantine III, and Ermanaric. Among people deceased in 420, Kālidāsa ranks 2. Before him is Jerome. After him are Pelagius, Orosius, Sulpicius Severus, Eunapius, and Porphyry of Gaza.