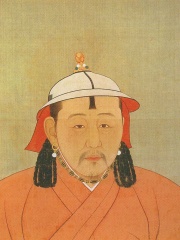 Külüg Khan (Mongolian: Хөлөг хаан, Hülüg Khaan, Külüg qaγan), born Khayishan (also spelled Khayisan, Mongolian: Хайсан, meaning "wall"), also known by the temple name Wuzong (Emperor Wuzong of Yuan, Chinese: 元武宗; pinyin: Yuán Wǔzōng; Wade–Giles: Wu-Tsung) (August 4, 1281 – January 27, 1311), Prince of Huai-ning (懷寧王) in 1304-7, was an emperor of the Yuan dynasty. Apart from Emperor of China, he is regarded as the seventh Great Khan of the Mongol Empire or Mongols, although it was only nominal due to the division of the empire. Read more on Wikipedia

Since 2007, the English Wikipedia page of Külüg Khan has received more than 397,574 page views. His biography is available in 29 different languages on Wikipedia making him the 2,212th most popular politician.

Among politicians, Külüg Khan ranks 2,196 out of 14,801. Before him are Lugal-zage-si, George Villiers, 1st Duke of Buckingham, François Darlan, Ghazan, Gwanggaeto the Great, and Leopold V, Duke of Austria. After him are Robert, King of Naples, Johannes Rau, Francisco Solano López, Prince Felix of Bourbon-Parma, Lennart Meri, and Demetris Christofias.

Among people born in 1281, Külüg Khan ranks 1. After him are Rudolf I of Bohemia, Yury of Moscow, Agnes of Austria, Hamdallah Mustawfi, and Waldemar, Margrave of Brandenburg-Stendal. Among people deceased in 1311, Külüg Khan ranks 2. Before him is Arnaldus de Villa Nova. After him are James II of Majorca, Qutb al-Din al-Shirazi, Margaret of Brabant, and Walter V, Count of Brienne.