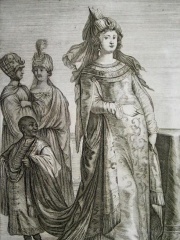 Kösem Sultan (Ottoman Turkish: كوسم سلطان‎, IPA: [cœˈsæm suɫˈtan]) (c. 1589 – 2 September 1651) – also known as Mahpeyker Sultan (Turkish pronunciation: [mahpejˈkæɾ suɫˈtan]; from the Persian compound ماه پيكر Māh-peyker meaning "moon framed") – was an Ottoman sultana and regent who effectively ruled the Ottoman Empire from September 1623 to May 1632, and then later from February 1640 until her death in September 1651. She became one of the most powerful and influential women in Ottoman history as well as a prominent and controversial figure during the era known as the Sultanate of Women.Kösem Sultan achieved power and influenced the politics of the Ottoman Empire when she became haseki sultan as favourite consort of Ottoman Sultan Ahmed I (r. Read more on Wikipedia

Among politicians, Kösem Sultan ranks 124 out of 15,710. Before her are Angela Merkel, Joseph II, Holy Roman Emperor, Otto I, Holy Roman Emperor, Henry V of England, Clovis I, and Louis XIII of France. After her are Vespasian, Cardinal Richelieu, Hatshepsut, Alfred the Great, Gustavus Adolphus of Sweden, and Hermann Göring.