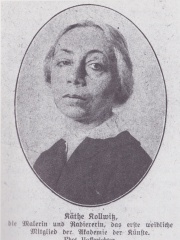 Käthe Kollwitz, née Schmidt (German pronunciation: [kɛːtə kɔlvɪt͡s]; 8 July 1867 – 22 April 1945), was a German artist who worked with painting, printmaking (including etching, lithography and woodcuts) and sculpture. Her most famous art cycles, including The Weavers and The Peasant War, depict the effects of poverty, hunger and war on the working class. Despite the realism of her early works, her art is now more closely associated with Expressionism. Read more on Wikipedia

Since 2007, the English Wikipedia page of Käthe Kollwitz has received more than 602,028 page views. Her biography is available in 46 different languages on Wikipedia making her the 17th most popular artist.

Among artists, Käthe Kollwitz ranks 17 out of 61. Before her are Yves Klein, Hans Holbein the Younger, Hiroshige, El Lissitzky, Luca Signorelli, and Theo van Doesburg. After her are Anders Zorn, Marina Abramović, Kurt Schwitters, Banksy, Adolph Menzel, and Josef Albers.

Among ARTISTS In Russia

Among artists born in Russia, Käthe Kollwitz ranks 2. Before her are El Lissitzky (1890).