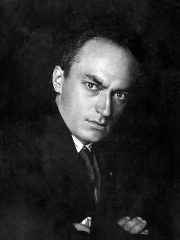 Kálmán Kalocsay (Hungarian pronunciation: [ˈkaːlmaːn ˈkɒlot͡ʃɒi]; 6 October 1891 in Abaújszántó – 27 February 1976) was a Hungarian Esperantist poet, translator and editor who considerably influenced Esperanto culture, both in its literature and in the language itself, through his original poetry and his translations of literary works from his native Hungarian and other languages of Europe. His name is sometimes Esperantized as Kolomano Kaloĉajo, and some of his work was published under various pseudonyms, including C.E.R. Bumy, Kopar, Alex Kay, K. Stelov, Malice Pik and Peter Peneter. Kalocsay studied medicine and later became a surgeon and the chief infectious disease specialist at a major Budapest hospital. Read more on Wikipedia

Since 2007, the English Wikipedia page of Kálmán Kalocsay has received more than 13,626 page views. His biography is available in 20 different languages on Wikipedia making him the 270th most popular physician.

Among PHYSICIANS In Hungary