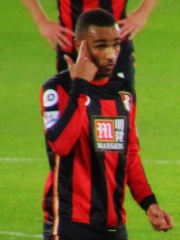 Felix Junior Stanislas (born 26 November 1989) is an English professional footballer who plays as a winger for Championship club AFC Bournemouth. He started his career in the youth team of West Ham United at the age of 10 in 2000. He signed a three-year academy contract in the summer of 2006, playing regularly for the under-18 side and reserves. Read more on Wikipedia

Among people born in 1989, Junior Stanislas ranks 1,100. Before him are Shun Takagi, Ryan McGowan, Dewayne Dedmon, Mike Will Made It, Cassadee Pope, and Arina Rodionova. After him are Cillian Sheridan, Joel Ward, Yuki Saneto, Braden Holtby, Brooke Candy, and Yatsunori Shimaya.