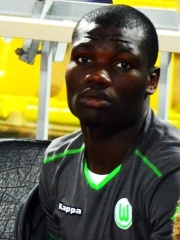 Bernard Malanda-Adje (28 August 1994 – 10 January 2015), nicknamed Junior Malanda, was a Belgian professional footballer who last played for German club VfL Wolfsburg as a defensive midfielder.He was a youth team player at Brussels, Anderlecht and Lille, going on to play in the reserve team of the latter. In 2012, he joined Zulte Waregem, and was a regular player as they finished runners-up of the 2012–13 Belgian Pro League. After that he was signed by Wolfsburg of the Bundesliga on a five-year contract, loaning him back for the first season before recalling him. Read more on Wikipedia

Since 2007, the English Wikipedia page of Junior Malanda has received more than 367,600 page views. His biography is available in 23 different languages on Wikipedia making him the 6,325th most popular soccer player.