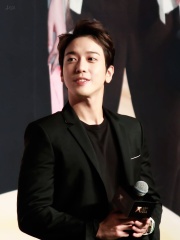 Jung Yong-hwa (Korean: 정용화; pronounced [tɕəːŋ joŋ hwa]; born June 22, 1989) is a South Korean musician, singer, songwriter, rapper, record producer and actor. He is the leader, lead vocalist and rhythm guitarist of the rock band CNBLUE. Jung made his television debut in You're Beautiful (2009), and has since starred in television dramas Heartstrings (2011), Marry Him If You Dare (2013), The Three Musketeers (2014) and The Package (2017). Read more on Wikipedia

Among musicians, Jung Yong-hwa ranks 2,046 out of 2,675. Before him are Jimmy McCulloch, Dan Peters, Joe Boyd, Chuck Leavell, David Silveria, and Bela B.. After him are Ian MacKaye, Roy Z, Diodato, Josh Dun, Adam Taubitz, and Sébastien Tellier.

Among MUSICIANS In South Korea