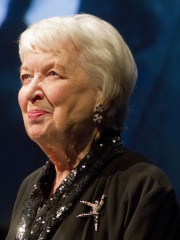 Dame June Rosemary Whitfield (11 November 1925 – 29 December 2018) was an English radio, television and film actress. Her big break was a lead in the BBC Light Programme radio comedy Take It from Here from 1953. Television roles soon followed, including appearances with Tony Hancock throughout his television career. Read more on Wikipedia

Since 2007, the English Wikipedia page of June Whitfield has received more than 1,605,156 page views. Her biography is available in 18 different languages on Wikipedia making her the 2,277th most popular actor.