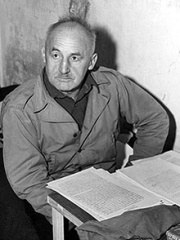 Julius Streicher (12 February 1885 – 16 October 1946) was a member of the Nazi Party. He was the founder and publisher of the virulently antisemitic newspaper Der Stürmer, which became a central element of the Nazi propaganda machine. His publishing firm also released three antisemitic books for children, including the 1938 Der Giftpilz (translated into English as The Toadstool or The Poisonous Mushroom), one of the most widespread pieces of propaganda, which warned about the supposed dangers Jews posed by using the metaphor of an attractive yet deadly mushroom. Read more on Wikipedia

Julius Streicher was a leading member of the Nazi party. He was most famous for his anti-Semitic propaganda, which he published in his newspaper, Der Stürmer.

Among politicians, Julius Streicher ranks 890 out of 15,710. Before him are Aurangzeb, Tullus Hostilius, Balbinus, Charles XV of Sweden, Luiz Inácio Lula da Silva, and William III of the Netherlands. After him are Nizam al-Mulk, Arthur Henderson, Antiochus IV Epiphanes, Pepi II Neferkare, Michael I Rangabe, and Charles XI of Sweden.