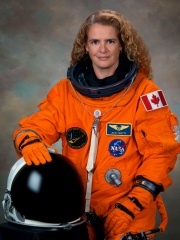 Julie Payette (French pronunciation: ​[ʒyli pajɛt]; born October 20, 1963) is a Canadian engineer, scientist and former astronaut who has been governor general of Canada since 2017, the 29th officeholder since Canadian Confederation.Payette holds engineering degrees from McGill University and the University of Toronto. She worked as a research scientist before joining the Canadian Space Agency (CSA) in 1992 as a member of the Canadian Astronaut Corps. She completed two spaceflights, STS-96 and STS-127, and has logged more than 25 days in space. Read more on Wikipedia

Since 2007, the English Wikipedia page of Julie Payette has received more than 1,615,236 page views. Her biography is available in 40 different languages on Wikipedia making her the 8,313th most popular politician.