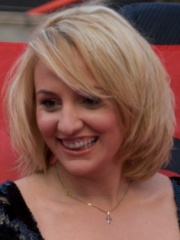 Juliana Pasha (born 20 May 1980, Burrel, Albania) is an Albanian singer. In 2010 she won Honorary Citizen Award of Burrel from the mayor of the city. After she went into Eurovision in 2010 she won the first prize in the festival "Kenga Magjike" with the song called "Sa e shite zemren". Read more on Wikipedia

Since 2007, the English Wikipedia page of Juliana Pasha has received more than 29,522 page views. Her biography is available in 33 different languages on Wikipedia making her the 1,861st most popular singer.

Among singers, Juliana Pasha ranks 1,870 out of 3,001. Before her are Azam Ali, Kendall Schmidt, Yvonne Catterfeld, Leena Peisa, Sido, and Ellen McLain. After her are Andrius Mamontovas, Luminița Anghel, Younha, Linde Lindström, JB, and Eva Rivas.

Among SINGERS In Albania