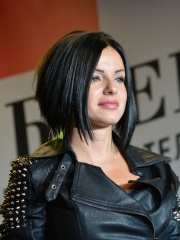 Yulia Olegovna Volkova (Russian: Юлия Олеговна Волкова; born 20 February 1985), better known by the alternative spelling of Julia, is a Russian singer best known for being a member of the Russian girl group t.A.T.u., along with Lena Katina. Formed in Moscow, Russia by Ivan Shapovalov in March 1999, the group signed a record deal with Universal Music Russia, and eventually Universal's sub-label Interscope Records in 2001. The group's first single, "All the Things She Said", topped the charts in countries including Australia, Austria, Denmark, Italy, Japan, New Zealand, Switzerland, the United States, and the United Kingdom, but also generated controversy due to the girls kissing onscreen. Read more on Wikipedia