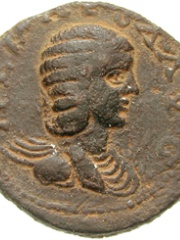 Julia Maesa (7 May before 160 AD – c. 224 AD) was a member of the Severan dynasty of the Roman Empire who was the grandmother of emperors Elagabalus and Severus Alexander, elder sister of empress Julia Domna, and mother of Julia Soaemias and Julia Mamaea. She wielded influence during the reigns of her grandsons as Augusta of the Empire from 218 to her death, especially on their elevation to emperors.Born in Emesa, Syria (modern day Homs), to an Arab family of priests of the deity Elagabalus, Maesa and her sister Domna were the daughters of Julius Bassianus. Through her sister's marriage, Maesa became sister-in-law to Septimius Severus and aunt of Caracalla and Geta, who all became emperors. Read more on Wikipedia

Julia Maesa was a member of the Severan dynasty, and she was most famous for being the grandmother of three Roman emperors: Elagabalus, Alexander Severus, and Julia Soaemias.

Among politicians, Julia Maesa ranks 2,990 out of 15,577. Before her are Ismail Qemali, Yazdegerd II, Leopold I, Duke of Austria, Charles Emmanuel IV of Sardinia, Taksin, and Armand Fallières. After her are Andreas Papandreou, Djedkare Isesi, Francis Phoebus of Navarre, Archduchess Maria Maddalena of Austria, Tetricus I, and Pekah.