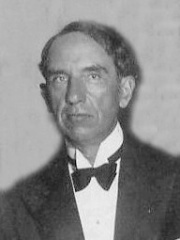 Jules Supervielle (16 January 1884 – 17 May 1960) was a Franco-Uruguayan poet and writer born in Montevideo. He was nominated for the Nobel Prize in Literature three times.He opposed the surrealism movement in poetry and rejected automatic writing, although he did adopt other techniques of modern poetry. In so doing he anticipated the literary movements of the late 1940s, including the work of such authors as René Char, Henri Michaux, Saint-John Perse or Francis Ponge. Read more on Wikipedia

Among writers, Jules Supervielle ranks 2,702 out of 5,755. Before him are Arthur Cravan, Emmanuel Carrère, Jules Guesde, Phrynichus, Hilaire Belloc, and David Shore. After him are J.-H. Rosny aîné, Fructuosus of Braga, Isaac Titsingh, Jon Fosse, Pavlo Tychyna, and Mihail Sebastian.

Among WRITERS In Uruguay