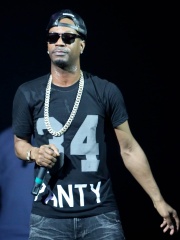 Jordan Michael Houston III (born April 5, 1975), known professionally as Juicy J, is an American rapper, songwriter, record producer, and record executive from Memphis, Tennessee. He is a founding member of the Southern hip hop group Three 6 Mafia, established in 1991, with whom he won an Academy Award for Best Original Song, for their single "It's Hard out Here for a Pimp". His most notable singles as a soloist are his features on the Top 40 singles: Mike Will Made It's "23", Usher's "I Don't Mind" and his own single "Bandz a Make Her Dance" (featuring Lil Wayne and 2 Chainz). Read more on Wikipedia

Among singers, Juicy J ranks 2,355 out of 3,541. Before him are Doja Cat, Charlie Wilson, Fabri Fibra, Alyosha, Mohsen Namjoo, and Benny Cristo. After him are Chenoa, Saara Aalto, Yuko Nakazawa, Aisha, Ksenija Pajčin, and Arijit Singh.