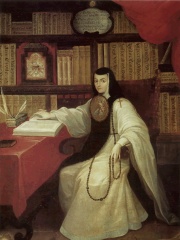 Sor Juana Inés de la Cruz (12 November 1648 – 17 April 1695) was a Mexican writer, philosopher, composer, poet of the Baroque period, and Hieronymite nun. Her outspoken opinions granted her lifelong names such as "The Tenth Muse" and "The Phoenix of America", for she was a flame that rose from the ashes of "religious authoritarianism".Sor Juana lived during Mexico's colonial period, making her a contributor both to early Spanish literature as well as to the broader literature of the Spanish Golden Age. Beginning her studies at a young age, Sor Juana was fluent in Latin and also wrote in Nahuatl, and became known for her philosophy in her teens. Read more on Wikipedia

Juana Inés de la Cruz was a Mexican nun, scholar, poet, and philosopher. She is most famous for her writing and intellect.

Among WRITERS In Mexico