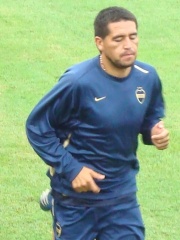 Juan Román Riquelme (Spanish pronunciation: [ˈxwan roˈman riˈkelme]; born 24 June 1978) is an Argentine former professional footballer and current 2nd vice-president of Argentine Club Atlético Boca Juniors, where he is also responsible of the football department, including youth academy and women's sections.Playing as an midfielder in the classic "Enganche" role, he spent most of his career playing for Boca Juniors, where he won ten titles, including three Copa Libertadores de América and one Intercontinental Cup, where they defeated Real Madrid 2-1. In 2002 he was transferred to FC Barcelona, but his time at the club was short due to his fights with the team's coach, Louis Van Gaal. Román would end up signing at Villareal, where he would have his most important moments in Europe, achieving a third position in the league and reaching the semifinals of the Champions League for the first time in the history of the "Submarino Amarillo". Read more on Wikipedia