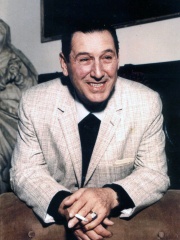 Juan Domingo Perón (UK: , US: , Spanish: [ˈxwan doˈmiŋɡo peˈɾon]; 8 October 1895 – 1 July 1974) was an Argentine Army general and dictator. After serving in several government positions, including Minister of Labour and Vice President of a military dictatorship, he was elected President of Argentina three times, serving from June 1946 to September 1955, when he was overthrown by the Revolución Libertadora, and then from October 1973 until his death in July 1974. During his first presidential term (1946–52), Perón was supported by his second wife, Eva Duarte: they were immensely popular among the Argentine working class. Read more on Wikipedia

Juan Perón was an Argentine military officer and politician who served as President of Argentina from 1946 to 1955 and 1973 to 1974. He is most famous for his social reforms in Argentina.

Among politicians, Juan Perón ranks 462 out of 15,710. Before him are Merneptah, Constantius II, Æthelstan, Ecgberht, King of Wessex, Georges Pompidou, and Charles III of Spain. After him are Shivaji, Emperor Taizong of Tang, Albert II of Germany, Alexander Lukashenko, Atahualpa, and Gaiseric.