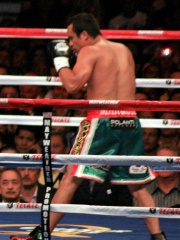 Juan Manuel Márquez Méndez (born August 23, 1973) is a Mexican former professional boxer who competed from 1993 to 2014. He is the third Mexican boxer (after Érik Morales and Jorge Arce) to become a world champion in four weight classes, having held nine world championships including the WBA (Super), IBF and WBO featherweight titles between 2003 and 2007; the WBC super featherweight title from 2007 to 2008; the WBA (Super), WBO, Ring magazine and lineal lightweight titles between 2008 and 2012; and the WBO junior welterweight title from 2012 to 2013. In a career that spanned over twenty years, Márquez was known for being a fast and highly technical boxer who was exceptionally skilled at combinations and counterpunches, yet also willing to engage in slugfests with opponents. Read more on Wikipedia

Among BOXERS In Mexico