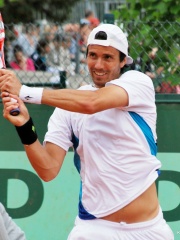 Juan Ignacio Chela (Spanish pronunciation: [xwan iɣˈnasjo ˈtʃela]; born 30 August 1979), nicknamed as “El Flaco” or “Liliano,” is a former professional tennis player from Argentina. Chela was given a three-month ban from the professional tour in 2001 for failing a drugs test. Post-doping ban, Chela went on to reach the quarterfinals of the 2004 and 2011 French Open, and the 2007 US Open, attaining a career-high singles ranking of world No. Read more on Wikipedia

Since 2007, the English Wikipedia page of Juan Ignacio Chela has received more than 87,613 page views. His biography is available in 26 different languages on Wikipedia making him the 485th most popular tennis player.

Among TENNIS PLAYERS In Argentina