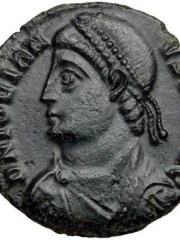 Jovian (Latin: Flavius Iovianus; 331 – 17 February 364) was Roman emperor from June 363 to February 364. As part of the imperial bodyguard, he accompanied Emperor Julian on his campaign against the Sasanian Empire and following the latter's death, Jovian was hastily declared emperor by his soldiers. With the army exhausted, provisions running low, and unable to cross the Tigris, he sought peace with the Sasanids on humiliating terms. Read more on Wikipedia

Jovian is most famous for being the largest planet in the solar system. It is a gas giant and has no solid surface.

Page views of Jovians by language

Among politicians, Jovian ranks 792 out of 15,710. Before him are James V of Scotland, Childeric I, Baudouin of Belgium, Zeno, Kurt von Schleicher, and John III of Sweden. After him are John I Tzimiskes, Jeroboam, Ælla of Northumbria, Cato the Younger, Magnus Maximus, and John of Bohemia.