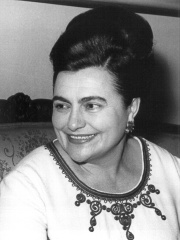 Jovanka Broz (née Budisavljević; Serbian Cyrillic: Јованка Броз, née Будисављевић; 7 December 1924 – 20 October 2013) was First Lady of Yugoslavia as the wife of Yugoslav leader Josip Broz Tito. She was a lieutenant colonel in the Yugoslav People's Army. She was married to Tito from 1952 until his death in 1980. Read more on Wikipedia

Among politicians, Jovanka Broz ranks 2,033 out of 15,710. Before her are Tamar, Urraca of León, Emperor Daizong of Tang, Rudolph of France, Wen Jiabao, and Louis the Younger. After her are Yuan Shu, Louis Blanc, Pepin of Italy, Alfonso II of Aragon, Euric, and Jean-Jacques Dessalines.