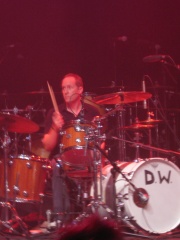 Joshua Ryan Freese (born December 25, 1972) is an American session drummer, multi-instrumentalist, songwriter, and composer. He is the son of tuba soloist Stan Freese and the older brother of musician Jason Freese.He is a permanent member of the Vandals and Devo, having formerly played drums for Guns N' Roses from 1997 to 2000, A Perfect Circle from 1999 to 2012, Nine Inch Nails from 2005 to 2008, Weezer from 2009 to 2011, and Sublime with Rome from 2011 to 2017. He has appeared on over 400 records. Read more on Wikipedia

Among musicians, Josh Freese ranks 2,374 out of 2,675. Before him are Mickey Madden, Rob Caggiano, Matthew Tuck, Seong-Jin Cho, Michelle Branch, and Imelda May. After him are Silenoz, Jim O'Rourke, Panjabi MC, John Digweed, Flood, and David Hodges.