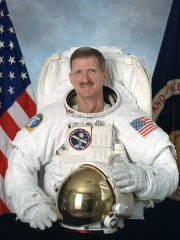 Joseph Richard "Joe" Tanner (born January 21, 1950) is an American instructor at the University of Colorado Boulder, mechanical engineer, a former naval officer and aviator, and a former NASA astronaut. He was born in Danville, Illinois. He is unusual among astronauts as he did not have a background in flight test nor did he earn any advanced academic degrees. Typically those who did not do military flight test have an M.D. Read more on Wikipedia

Since 2007, the English Wikipedia page of Joseph R. Tanner has received more than 38,325 page views. His biography is available in 18 different languages on Wikipedia making him the 357th most popular astronaut.