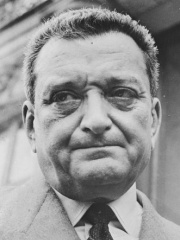 Joseph Laniel (French pronunciation: ​[ʒɔzɛf lanjɛl]; 12 October 1889, Vimoutiers, Orne – 8 April 1975, Paris) was a French conservative politician of the Fourth Republic, who served as Prime Minister for a year from 1953 to 1954. During the middle of his tenure as Prime Minister Laniel was an unsuccessful candidate for the French Presidency, a post won by René Coty. Co-founder of the Republican Party of Liberty (PRL), then of the National Center of Independents and Peasants (CNIP), Laniel's cabinet was overturned after the French defeat at Dien Bien Phu in Indochina in 1954. Read more on Wikipedia

Among politicians, Joseph Laniel ranks 10,635 out of 15,710. Before him are Jayavarman III, Ignacy Daszyński, Moritz Balthasar Borkhausen, Mary McAleese, José Joaquín de Herrera, and Heliocles I. After him are Kaarlo Castrén, Charles Savarin, William B. Travis, Khamerernebty II, Henri Brisson, and Rickard Sandler.