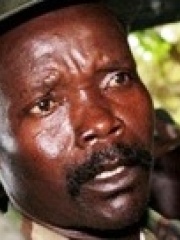 Joseph Rao Kony (pronounced [koɲ]; likely born 1961) is the leader of the Lord's Resistance Army (LRA), a guerrilla group that formerly operated in Uganda. While initially purporting to fight against government oppression, the LRA allegedly turned against Kony's own supporters, supposedly to "purify" the Acholi people and turn Uganda into a theocracy. Kony proclaims himself the spokesperson of God and a spirit medium and claims he is visited by a multinational host of 13 spirits, including a Chinese phantom. Read more on Wikipedia

Since 2007, the English Wikipedia page of Joseph Kony has received more than 3,814,323 page views. His biography is available in 46 different languages on Wikipedia making him the 129th most popular extremist.

Among EXTREMISTS In Uganda