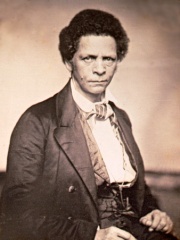 Joseph Jenkins Roberts (March 15, 1809 – February 24, 1876) was an African-American merchant who emigrated to Liberia in 1829, where he became a noted politician. Elected as the first (1848–1856) and seventh (1872–1876) President of Liberia after independence, he was the first man of African descent to govern the country, serving previously as governor from 1841 to 1848. Born free in Norfolk, Virginia, Roberts emigrated as a young man with his mother, siblings, wife, and child to the young West African colony. Read more on Wikipedia

Since 2007, the English Wikipedia page of Joseph Jenkins Roberts has received more than 309,544 page views. His biography is available in 30 different languages on Wikipedia making him the 9,370th most popular politician.