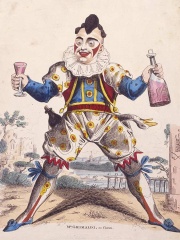 Joseph Grimaldi (18 December 1778 – 31 May 1837) was an English actor, comedian and dancer, who became the most popular English entertainer of the Regency era. In the early 1800s, he expanded the role of Clown in the harlequinade that formed part of British pantomimes, notably at the Theatre Royal, Drury Lane and the Sadler's Wells and Covent Garden theatres. He became so dominant on the London comic stage that the harlequinade role of Clown became known as "Joey", and both the nickname and Grimaldi's whiteface make-up design were, and still are, used by other types of clowns. Read more on Wikipedia

Since 2007, the English Wikipedia page of Joseph Grimaldi has received more than 294,835 page views. His biography is available in 16 different languages on Wikipedia making him the 3,249th most popular actor.