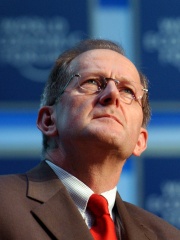 Joseph Deiss (born 18 January 1946) is a Swiss economist and politician who served as a Member of the Swiss Federal Council from 1999 to 2006. A member of the Christian Democratic People's Party (CVP/PDC), he first headed the Federal Department of Foreign Affairs (1999–2002) before transferring to the Federal Department of Economic Affairs (2003–2006). Read more on Wikipedia

Among politicians, Joseph Deiss ranks 10,024 out of 15,710. Before him are Gotarzes I, Carlos Agostinho do Rosário, Miroslav Lajčák, Giovanni Goria, Caecilia Paulina, and Manuel Roxas. After him are Mohammed bin Thani, William Waddington, Entemena, Neferefre, Giora Feidman, and Adamantios Androutsopoulos.