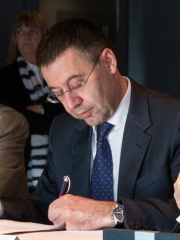 Josep Maria Bartomeu Floreta (born 6 February 1963) is a Spanish entrepreneur and the current president of football club FC Barcelona. He started in the latter role in 2014, following the resignation of Sandro Rosell. Partner and CEO of the companies ADELTE and EFS, Bartomeu served on the board of FC Barcelona during Joan Laporta's presidency (as head of the basketball section) along with Sandro Rosell, who resigned due to differences with the then president. Read more on Wikipedia

Since 2007, the English Wikipedia page of Josep Maria Bartomeu has received more than 870,865 page views. His biography is available in 27 different languages on Wikipedia making him the 168th most popular businessperson.