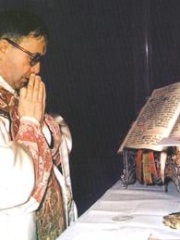 Josemaría Escrivá de Balaguer y Albás, (9 January 1902 – 26 June 1975) was a Spanish Roman Catholic priest who founded Opus Dei, an organization of laypeople and priests dedicated to the teaching that everyone is called to holiness by God and that ordinary life can result in sanctity. He was canonized in 2002 by Pope John Paul II, who declared Josemaría should be "counted among the great witnesses of Christianity." Escrivá gained a doctorate in civil law at the Complutense University of Madrid and a doctorate in theology at the Lateran University in Rome. His principal work was the initiation, government and expansion of Opus Dei. Read more on Wikipedia

Josemaría Escrivá de Balaguer, more commonly known as "josemaría," was a Spanish priest and writer. He is most famous for founding the Opus Dei, a Catholic organization that has been accused of being a cult.

Among religious figures, Josemaría Escrivá ranks 509 out of 2,272. Before him are Pope Celestine II, Louis de Montfort, Dominic Savio, Laban, Pope Alexander I of Alexandria, and Pontius Pilate's wife. After him are Victor of Aveyron, Anne Catherine Emmerich, Pope John XVIII, Abdullah ibn Masud, Saint Eustace, and Dorothea of Caesarea.