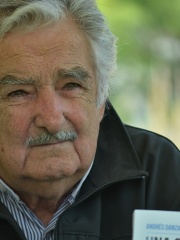 José Alberto "Pepe" Mujica Cordano (Spanish: [xoˈse muˈxika]; born 20 May 1935) is a Uruguayan politician, former revolutionary and farmer who served as the 40th president of Uruguay from 2010 to 2015. A former guerrilla with the Tupamaros, he was tortured and imprisoned for 14 years during the military dictatorship in the 1970s and 1980s. A member of the Broad Front coalition of left-wing parties, Mujica was Minister of Livestock, Agriculture, and Fisheries from 2005 to 2008 and a Senator afterwards. Read more on Wikipedia

Mujica is most famous for being the president of Uruguay from 2010 to 2015. He is also known for being a former member of the Tupamaros, a left-wing guerrilla group that was active in the 1960s and 1970s.

Among politicians, José Mujica ranks 416 out of 15,577. Before him are Louis Bonaparte, Louis VIII of France, George III of the United Kingdom, Baibars, Yongle Emperor, and Oleg of Novgorod. After him are Matthias, Holy Roman Emperor, George II of Great Britain, Severus Alexander, Albert II of Belgium, Henry the Fowler, and Charles I of England.