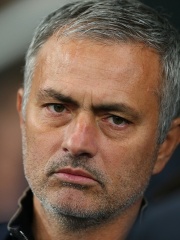 José Mário dos Santos Mourinho Félix, GOIH (Portuguese pronunciation: [ʒuˈzɛ moˈɾiɲu] (listen); born 26 January 1963), is a Portuguese professional football manager and former player who is the current head coach of Italian Serie A club Roma. Nicknamed "The Special One", he is widely considered to be one of the greatest managers of all time, and is one of the most decorated managers ever.After an uneventful career as a midfielder in the Portuguese leagues, Mourinho moved into coaching, first as an interpreter for Sir Bobby Robson at Sporting CP and Porto, before gaining success as an assistant at Barcelona under both Robson and his successor, Louis van Gaal. After impressing with brief stints at Benfica and União de Leiria, Mourinho returned to Porto as manager in 2002, winning the Primeira Liga twice, a Taça de Portugal, the UEFA Cup, and the UEFA Champions League, Porto's first European Cup title since 1987. Read more on Wikipedia

Jose Mourinho is most famous for his time as manager of Chelsea, where he won three Premier League titles, one FA Cup, two League Cups, and one UEFA Champions League.

Among COACHES In Portugal

Among coaches born in Portugal, José Mourinho ranks 1. After him are André Villas-Boas (1977) and Nelo Vingada (1953).