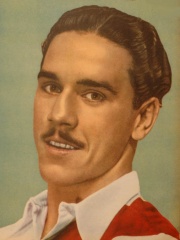 José Manuel Moreno Fernández (3 August 1916 — 26 August 1978), nicknamed "El Charro", was an Argentine footballer who played as an inside forward for several clubs in Argentina, Mexico, Chile, and Colombia; for many who saw him play, he is regarded as one of the greatest players of all time, even among Diego Maradona, Pelé and Alfredo Di Stéfano, and was the first footballer ever to have won first division league titles in four countries (later players to emulate the feat include Jiri Jarosik and Rivaldo). Moreno was part of the River Plate team known as La Máquina ("The Machine") which dominated Argentine football in the 1940s, and was also a member of the Argentine national team with which he won the South American Championships in 1941 and 1947, being chosen in the latter as the best player of the tournament.He was regarded by many as a complete player. In 1999, he was ranked as the 5th best South American player in the 20th Century (behind Pelé, Maradona, Di Stéfano and Garrincha), and among the 25 best players in the world through a poll by the IFFHS. He was known as a player of great technique, great vision, and lethal in the penalty area. Read more on Wikipedia