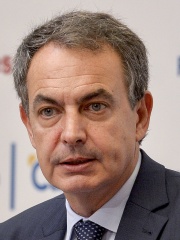 José Luis Rodríguez Zapatero (Spanish: [xoseˈlwis roˈðɾiɣeθ θapaˈteɾo] (listen); born 4 August 1960) is a Spanish politician and member of the Spanish Socialist Workers' Party (PSOE). He was the Prime Minister of Spain being elected for two terms, in the 2004 and 2008 general elections. Read more on Wikipedia

Among politicians, José Luis Rodríguez Zapatero ranks 5,499 out of 15,710. Before him are Alexios III of Trebizond, Edgar, King of Scotland, Isabella, Queen of Armenia, René Préval, Ivo Josipović, and Al-Adil I. After him are Margaret of Brabant, Lucius Appuleius Saturninus, Liuva I, Charlotte Aglaé d'Orléans, Prince Wilhelm of Prussia, and Fritz Thyssen.