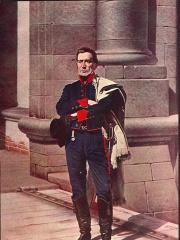 José Gervasio Artigas Arnal (Spanish pronunciation: [xoˈse xeɾˈβa.sjo aɾˈti.ɣas aɾˈnal]; June 19, 1764 – September 23, 1850) was a political leader, military general, statesman and national hero of Uruguay and the broader Río de la Plata region. He fought in the Latin American wars of independence against the Spanish Empire, but also against the Portuguese Empire and the centralist government of Buenos Aires in the pursuit of political and civil liberties for the peoples of the Viceroyalty of the Río de la Plata. He is considered a Libertador of Latin America and a national hero in Uruguay, sometimes referred as "the father of Uruguayan nationhood". His biggest political project was the creation of the Federal League, a confederation of South American provinces under a federal style of government inspired by the United States. Read more on Wikipedia

José Gervasio Artigas is most famous for his role in the formation of Uruguay.