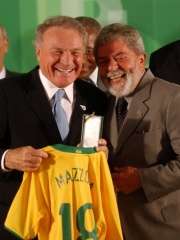 José João Altafini (Italian: [altaˈfiːni]; born 24 July 1938), also known as "Mazzola" in Brazil (as when he started to play it was noted that he resembled the Italian legend Valentino Mazzola), is an Italian-Brazilian former footballer, who played as a forward. Although he began his career with Palmeiras in Brazil, he soon moved to play football in Italy, and is mostly remembered for his highly successful stint with Italian club A.C. Milan, with which he achieved great domestic and international success; he later also played for Napoli and Juventus, before ending his career in Switzerland with spells at Chiasso and Mendrisiostar. A highly prolific goalscorer, Altafini also held the record for the most goals scored in a single European Cup campaign for over 50 years; he is also one of only eight players to have scored five goals in a single European Cup match. Read more on Wikipedia

Since 2007, the English Wikipedia page of José Altafini has received more than 422,921 page views. His biography is available in 35 different languages on Wikipedia making him the 98th most popular soccer player.