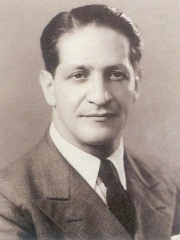 Jorge Eliécer Gaitán Ayala (January 23, 1903 – April 9, 1948) was a left-wing Colombian politician and charismatic leader of the Liberal Party. He served as the mayor of Bogotá from 1936-37, the national Education Minister from 1940-41, and the Labor Minister from 1943–44. He was assassinated during his second presidential campaign in 1948, setting off the Bogotazo  and leading to a violent period of political unrest in Colombian history known as La Violencia (approx. Read more on Wikipedia

Among politicians, Jorge Eliécer Gaitán ranks 6,876 out of 15,710. Before him are Petru Rareș, Sergio Oliva, Tokugawa Ieharu, Mikhail of Vladimir, Quintus Pedius, and Daru of Baekje. After him are Princess Margaret Yolande of Savoy, Zénaïde Bonaparte, Agron, Albert I, Duke of Saxony, Janusz Korwin-Mikke, and Princess Françoise of Orléans.