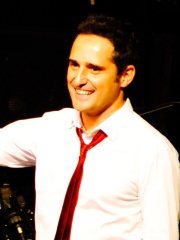 Jorge Abner Drexler Prada (born September 21, 1964) is a Uruguayan musician, actor and doctor specializing in otolaryngology. In 2004, Drexler won wide acclaim after becoming the first Uruguayan to win an Academy Award, which he won for composing the song "Al Otro Lado del Río" from The Motorcycle Diaries. Read more on Wikipedia

Among singers, Jorge Drexler ranks 1,539 out of 3,528. Before him are Biyouna, Rockwell, Lyle Lovett, Yesung, Kim Deal, and Alan Jackson. After him are Óscar Chávez, Sophie Tucker, Lena Meyer-Landrut, Monique Melsen, Andy, and Shahram Nazeri.

Among SINGERS In Uruguay

Among singers born in Uruguay, Jorge Drexler ranks 2. Before him are Natalia Oreiro (1977).