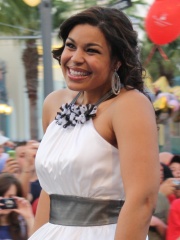 Jordin Brianna Sparks (born December 22, 1989) is an American singer-songwriter and actress. She rose to fame in 2007 after winning the sixth season of American Idol at age 17, becoming the youngest winner in the series' history. Her self-titled debut studio album, released later that year, was certified platinum by the Recording Industry Association of America (RIAA) and has sold over two million copies worldwide. Read more on Wikipedia

Among singers, Jordin Sparks ranks 2,698 out of 3,541. Before her are Kwon Ri-se, Ivi Adamou, Eugent Bushpepa, Maria Elena Kyriakou, Ola Salo, and Santigold. After her are Oliver James, Daniel Diges, Pras, Arisa, Soyou, and Hyolyn.