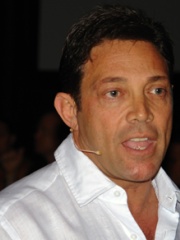 Jordan Ross Belfort (; born July 9, 1962) is an American author, motivational speaker, and former stockbroker. In 1999, he pled guilty to fraud and related crimes in connection with stock-market manipulation and running a boiler room as part of a penny-stock scam. Belfort spent 22 months in prison as part of an agreement under which he gave testimony against numerous partners and subordinates in his fraud scheme. Read more on Wikipedia

Since 2007, the English Wikipedia page of Jordan Belfort has received more than 15,395,275 page views. His biography is available in 32 different languages on Wikipedia making him the 67th most popular extremist.