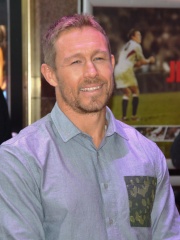 Jonathan Peter Wilkinson, CBE (born 25 May 1979) is an English former rugby union player. A fly-half, he played for Newcastle Falcons and Toulon and represented England and the British and Irish Lions. He is particularly known for scoring the winning drop goal in the 2003 Rugby World Cup Final and is widely acknowledged as one of the best rugby union players of all time.He played club rugby for twelve seasons in the English Premiership with Newcastle Falcons. Read more on Wikipedia

Since 2007, the English Wikipedia page of Jonny Wilkinson has received more than 1,410,175 page views. His biography is available in 25 different languages on Wikipedia making him the 7th most popular rugby player.

Among rugby players, Jonny Wilkinson ranks 7 out of 9. Before him are Jonah Lomu, Francois Pienaar, Sébastien Chabal, Dan Carter, Sergio Parisse, and Richie McCaw. After him are Percy Montgomery and Shane Williams.